It all started with an idea a couple years ago, that I could possibly climb all the highest mountains in each country in the world. A very ambitious goal I know, but you have to have something to aim for and motivate you to push further. As an avid hiker and aspiring serious mountaineer I feel like having a goal far ahead of my skills or capabilities actually drives me on, both to train and plan for the next adventure. This is however a lifelong goal, so don’t expect me to attempt Everest any time soon, there are many much more exciting mountains to climb until I even consider it. Triglav has been on my list of to do mountains for a couple a years. Last year in October it was given an attempt, but it was foiled by a car breakdown in the Soca valley. I felt it was left undone, so a new expedition was planned again for October this year. I managed to convince a friend to join the undertaking. I had met Jonathan during the summer while working as a guide/polar bear guard on a cruise ship in the Arctic, he was there as a geologist. Check out his Instagram: @jonfuhrmann

We decided on the best dates and both jumped on trains for Jesenice, Slovenia. Jonathan had to fly first from England to Vienna and then a train further South. I had to catch a train from Innsbruck. We both met up in Villach, close to the border of Austria and Slovenia, with just a couple minutes to spare to catch the connecting train to Jesenice the adventure was on!

We arrived in Jesenice in the early afternoon, packs ready for four days of heavy-duty hiking and possibly some mountaineering, depending on the conditions. It had snowed quite heavily in September so we took no chances and brought ice axes and crampons. We were welcomed to Slovenia quite nicely with a young man, Domen, helping us out at the bus stop as we looked possibly a bit lost trying to find the bus to Mojstrana, which was the starting point of our hike into Vrata valley and later climbing the North side of Triglav. He gaves us many great tips for things to see and it turns out he is an aspiring photographer, so have to give him a shout out, see his Instagram: @jorghut 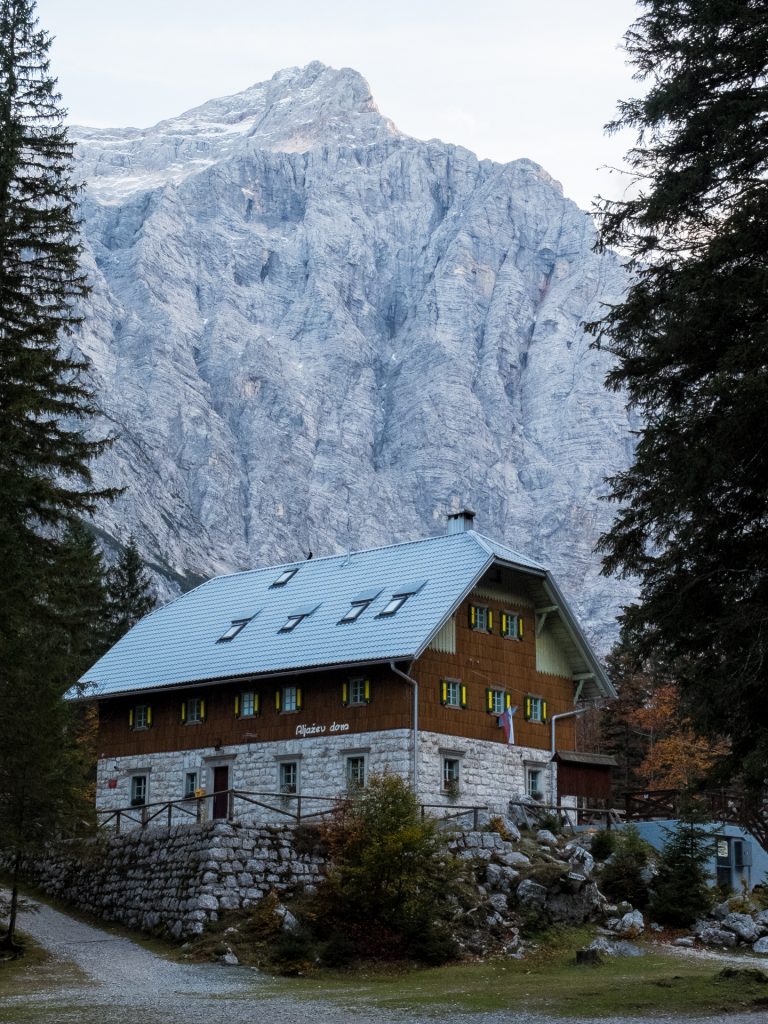 We hiked the Vrata valley passing by the beautiful Pericnik waterfall on the way. It was a 9 km hike through the valley until we reached our overnight hut, Aljazev. We had found out it was open in October, one of the few huts to be open. However when we arrived it as not so easy to notice activity, we were definitely at the end of the season. We were put up in a room for the night and had a cabbage goulash soup for dinner, Jonathan was more a fan than I was, must be his mixed Austro-Hungarian heritage. There were a few other hikers that showed up in the evening, a small group of Germans, also planning to climb Triglav and a couple inexperienced tourists, who thought they might try Triglav as well, however they had no experience or equipment so we advised them otherwise and they were happy for our alternative suggestions. This night it was early to bed; we needed to be well rested for the next day.

We stared early, waking up just after 06:00, a bit before sunrise. Packed our bags and headed outside to cook some porridge for breakfast. We left the hut area around 07:15 and decided to do the Pragweg, a slightly easier route than what we had planed, but as it had been raining during the night we didn’t want to take too many chances with slippery wet rock and metal on the via ferrata. It was somewhat cloudy and damp as we started making our way up the face. The route was well-marked and easy to follow, actually a bit too easy, with not many points where it felt like a real via ferrata. However we gained a fair bit of altitude quickly and climbing with relatively heavy backpacks we were happy with a slightly easier route. It took us a good four hours to reach the semi-plateau at around 2100m. 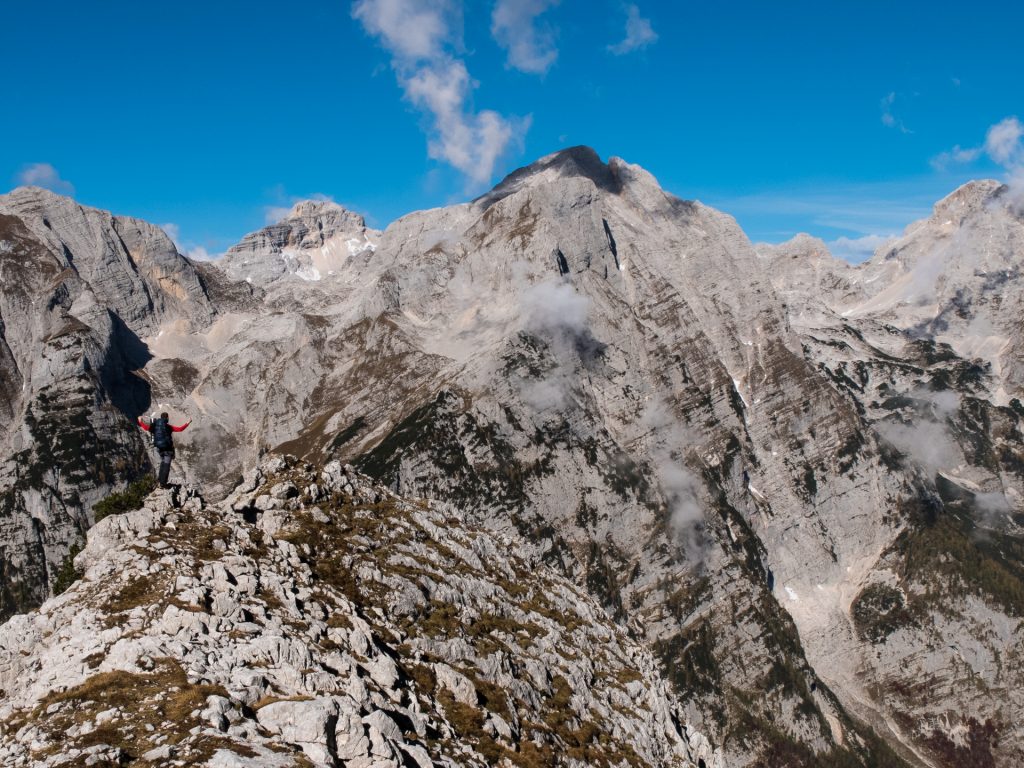 We reached the Triglavski hut at 2515m at around 12:45. We saw some men coming up from the East side, turned out to be the Slovenian infantry on an exercise, they stopped at the hut. There was also a mountain guide with three guests heading up the ridge towards the top at the same time as us. It took about an hour from the hut to reach the summit at 2864m. Amazing views followed, as there was a break in the clouds. We also cooked some water for a hot lunch. Chatting with the guide and his group, he gave us good tips on a shortcut decent we had not considered and also of the Triglav tradition of being spanked at the top of the mountain three times with a rope. Being the ever-adventurous one, I asked for a spanking, put my head in through the door of the little “house” that was on the summit and he proceeded to give me a dose of tradition. It seems I evoked some sort of fear of missing out feeling within the others, so all got spanked as well. It was a great feeling sharing the summit experience with such whimsical fun! 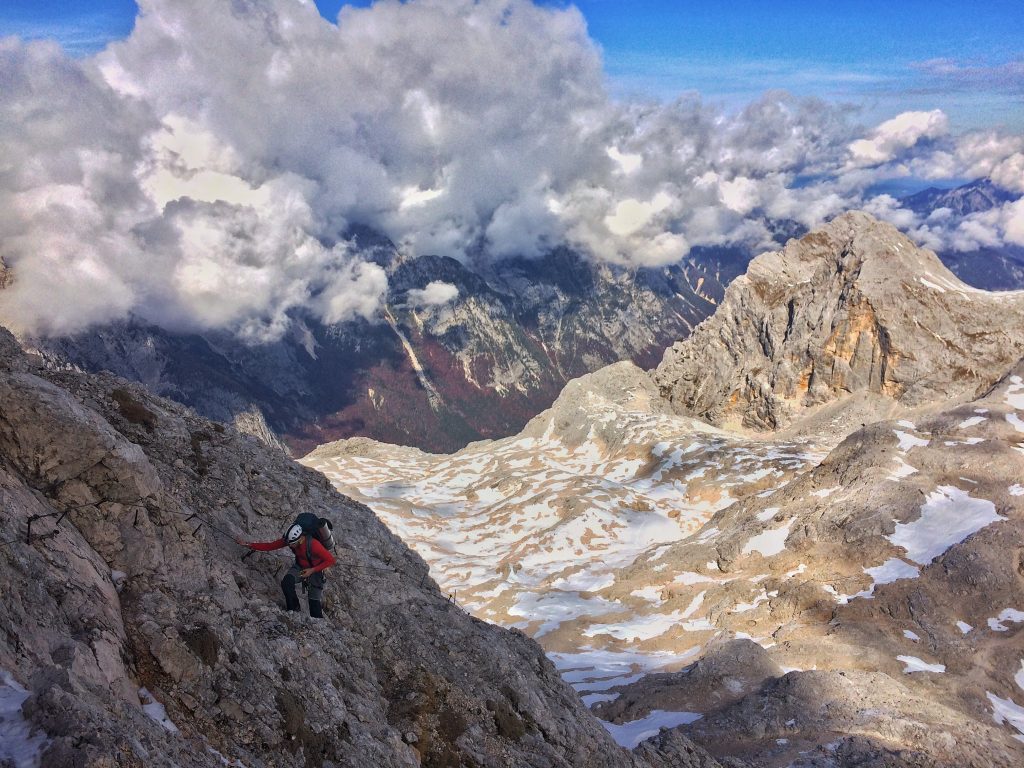 Now Jonathan and I had to get down as we had to decent all the way down to 1817m to the Vodnikov hut. It turned out to be a hut in a beautiful location, however closed, but with an open winter room and running water. I had been worried that we might have to find some snow patches to melt water, but the guide had mentioned that the hut had a spring that was open during winter. Arriving around 17:30, both very exhausted after the climb and long hiking in rough terrain. We cooked our dinner, drank lots of water and crashed in bed pretty early. We were both elated and thrilled by our experience. 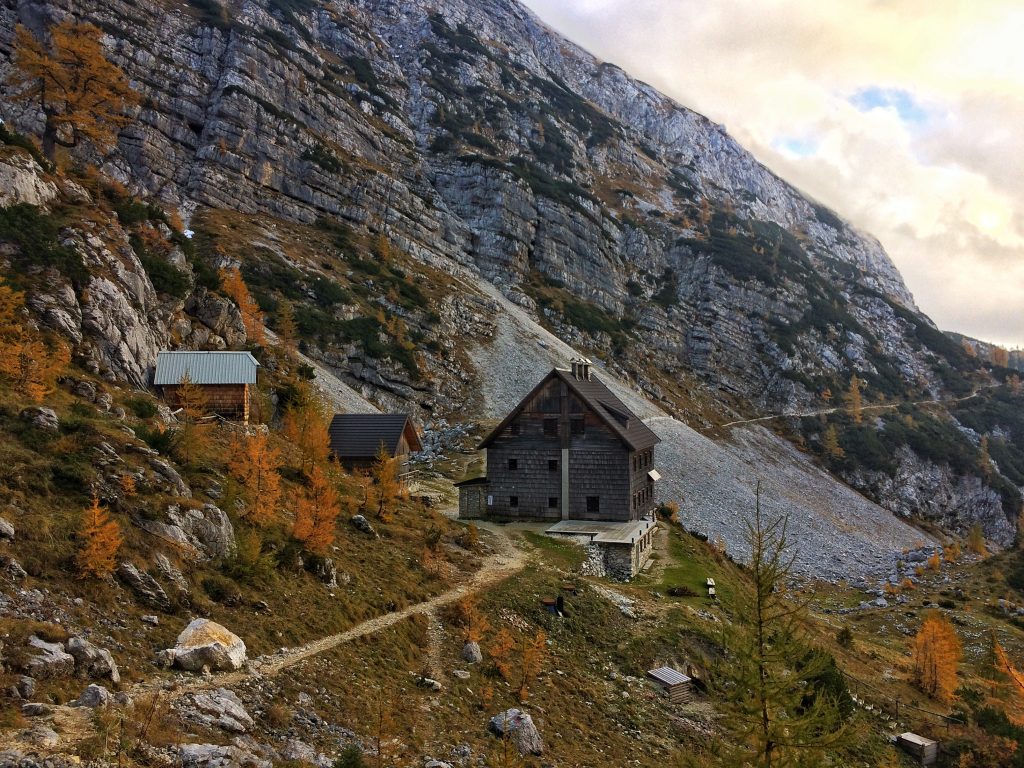 Extremely lazy morning, we woke up at 07:40, after some 11 hours of sleep. We go outside just in time to catch the golden rays of the sun light up the mountaintops, Triglav included. It was clear blue sky and everything looked like it was going to be a perfect day weather wise. We did not have a long way to hike as we had decided to stay in a hut only 10 km away, giving us plenty of time. We had a slow and luxurious breakfast, only leaving the Vodnikov hut at around 09:30. The route we hiked was called the geologists way, traversing the mountainsides, keeping altitude for the most part, which was very nice as it made for easy hiking. The sun had also started to be felt and it was shorts and t-shirt weather the whole time. We met the occasional hikers along the way, mostly Slovenians. The hike took us from the high alpine landscape down to the somewhat lower alpine forests. Some trees had started to turn yellow, while others were evergreen, which made a nice contrast with the white greyish rock. 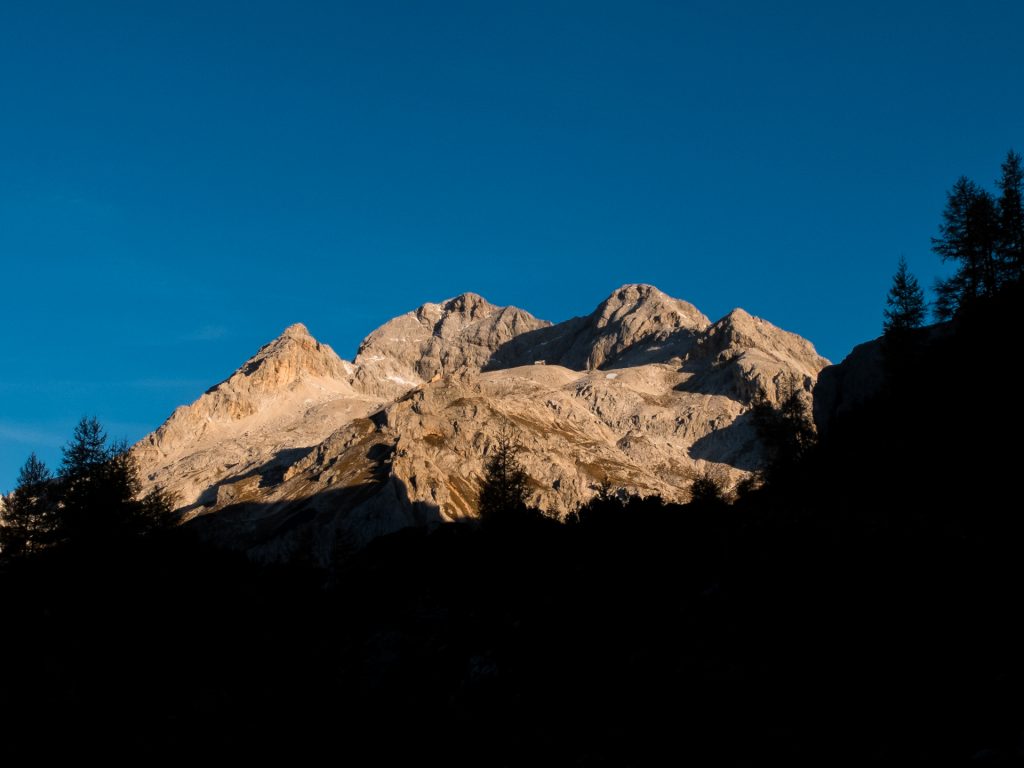 We arrived in the Lapinca hut around 13:30, asked to be put up in a bed and ordered a pair of radlers. We still had a lot of lunch left, so we cooked our own. There were a few people that passed by the hut, again mostly Slovenians. The hut itself was run it seemed by an elderly couple that did not speak many words of English. We relaxed in and around the hut for the afternoon and had a massive sausage and beer dinner, again something that was more Jonathan’s forte. We ended up being the only ones staying in the hut that night.

We slept well and got up early leaving the hut at 07:00, right before sunrise. The sky was clear and we could see mountains on the horizon with golden light slowly making its way up and over them. I am not personally often up for the sunrise, but it seems like something I should experience more often, it is awesome! We hiked a very seldom-used track, through beautiful and soft forest area, which took us passed a mountain alm (farm) called Klek. I had found on my GPS that this alm had a geocache and in the description was the story of the alm. It had been a shelter for partisans during the Second World War and it was said that if the people from capital Ljubljana could not find the alm, how could the Germans. We found that pretty funny. We had hoped to find water at Klek, but it turned out there was no open spring. We however came across some people in a nearby hut that very generously shared water with us. They were there to work on and maintain the trails. 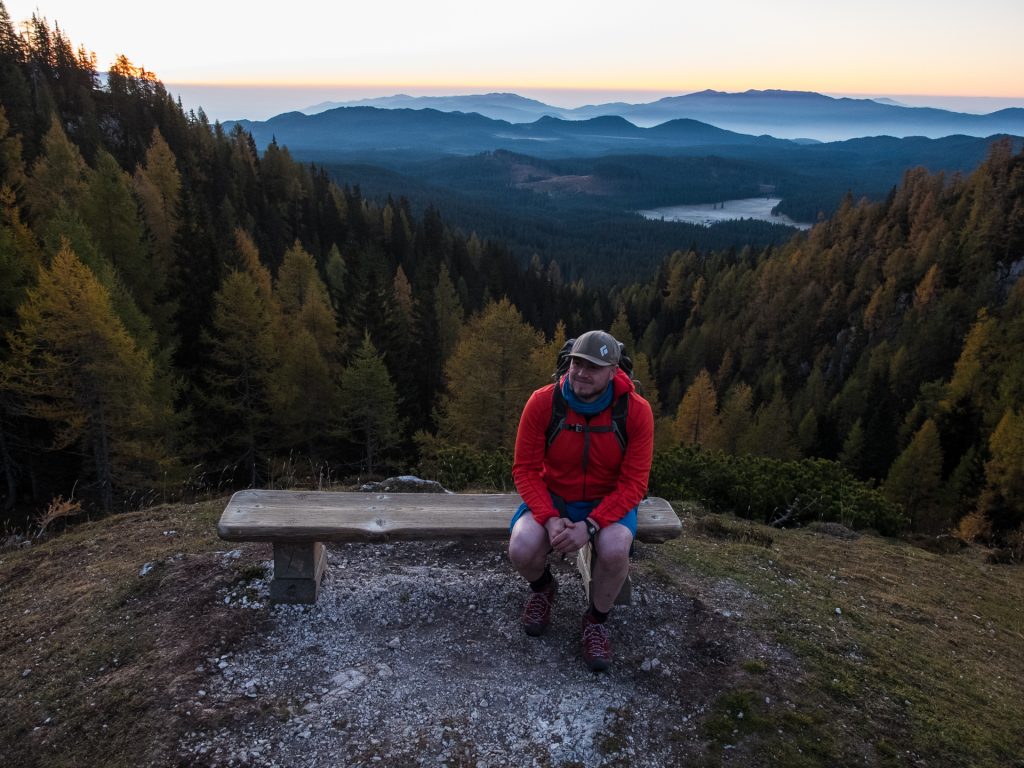 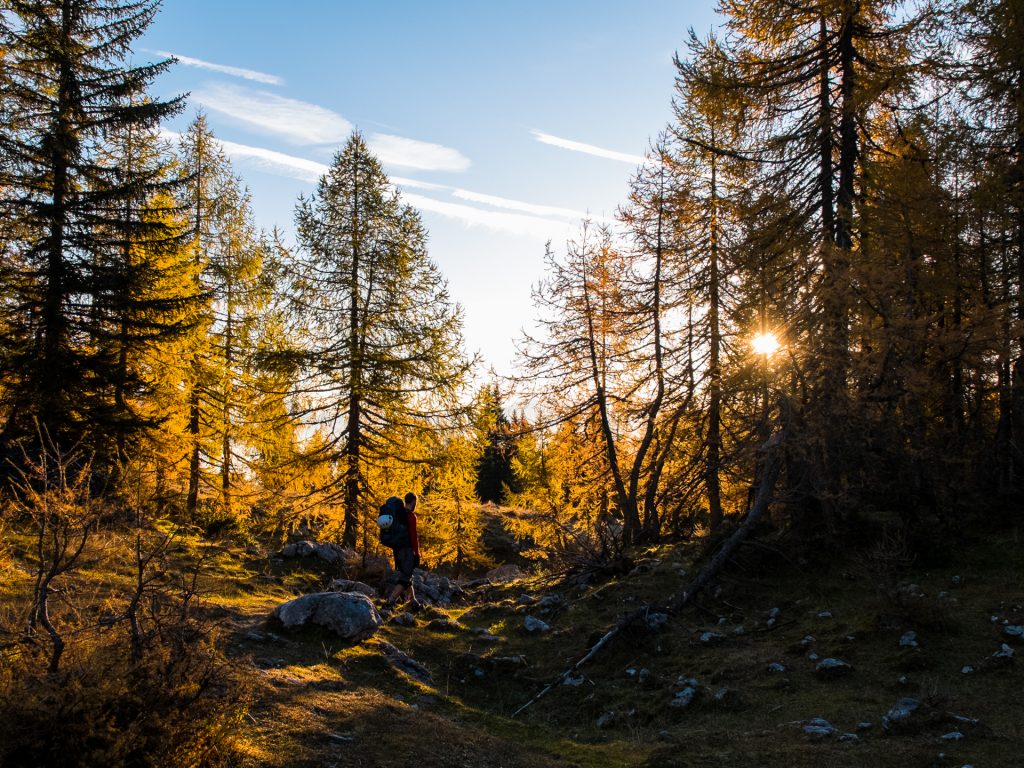 We continued on our way towards Bled, descending quite rapidly towards the valley floor and the forest changing around us. It was somewhat of a long hike requiring some searching for route signs and looking at Google Maps as we had gone outside of the area of the map that I had brought along. We reached the tiny town of Krnica and jumped in the first store we found to quench our thirst with an isotonic drink. We walked through the somewhat sparsely populated countryside until we reached our end destination, lake Bled, famous for rowing completions. Jonathan was pretty excited about seeing it, given that he had been a rower during university. Our feet were hurting from the long trek; this had been the longest distance we had covered. We reached the lake at around 13:00, just in time to have lunch in an outdoor restaurant at the lakeside. We felt we had earned a good meal and an ice cream for dessert to cool down in the +20°C heat. 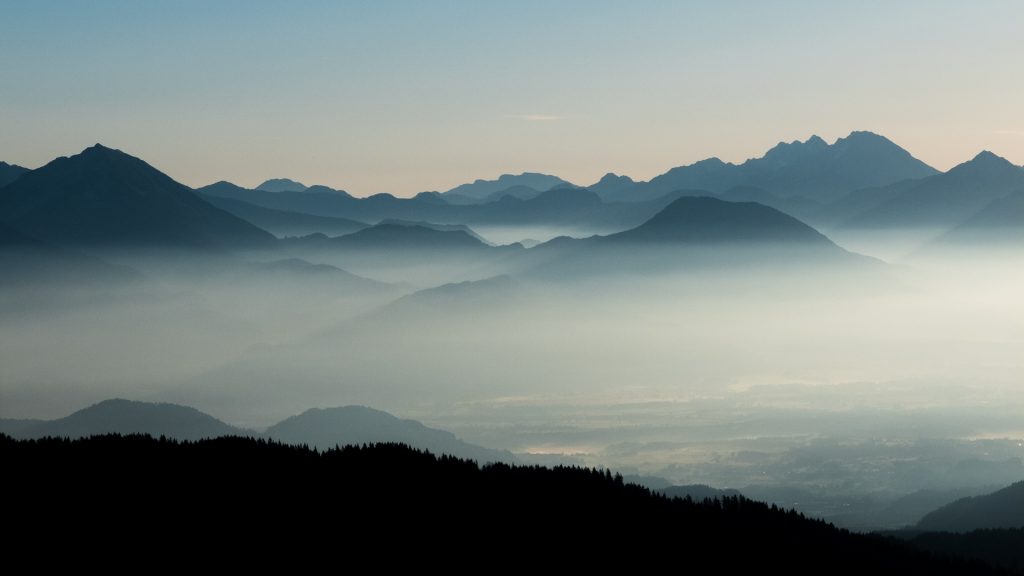 We basked in the sun for a couple hours at the lake, unfortunately not able to jump in, so we tried as much as possible to stay away from the general public as we must have stunk quite heavily. We had to leave lake Bled to catch a bus back to Jesenice and then onwards the train to Innsbruck and Vienna respectively. This had been a fun challenging adventure in beautiful surroundings with great company and I much look forward to the next adventure! 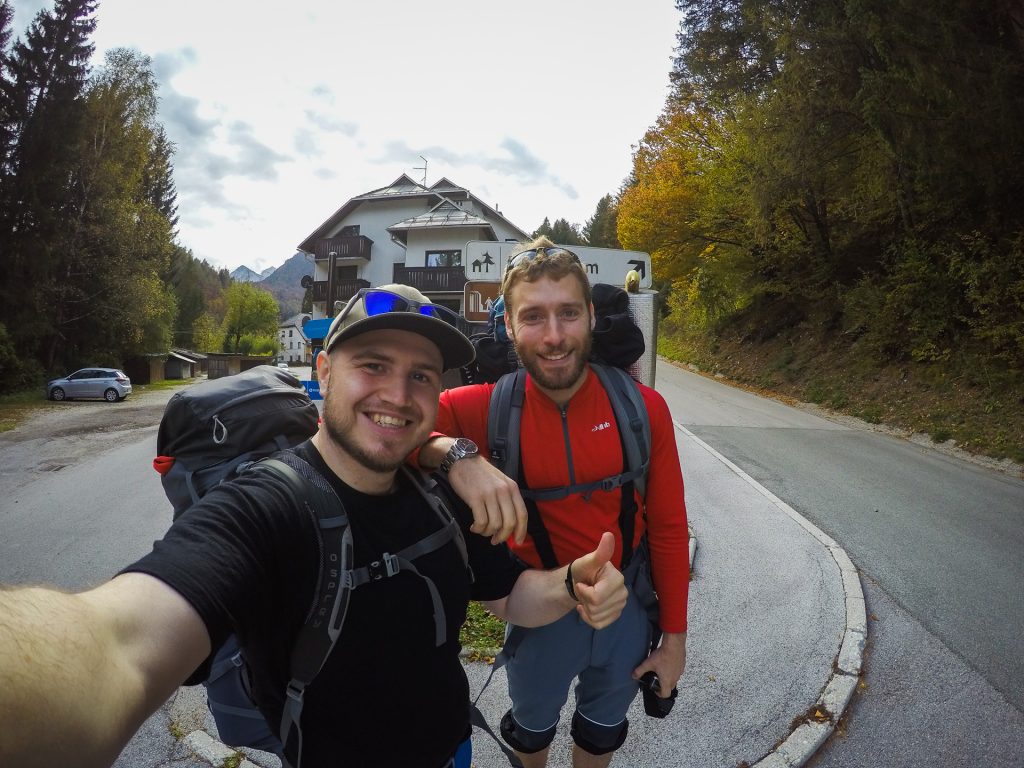