In June this year I had a month of vacation time. I had planned to spend that time in Austria, but because of a break-up those plans needed to be changed. I still had plane tickets to Munich, so I came up with alternatives of things I could do. The main objective was to climb Zugspitze (2962m), the highest mountain in Germany.

First I contacted a friend in Munich, Chrissi and set up a little via ferrata mission in Berchtesgaden. We decided to do Grünstein, a nice little starter climb for those who had not done much via ferrata before. Chrissi’s friend Sandra also came along and she was already experienced, so told us that we might as well do the harder part of the route up, as the easier way was pretty crowded. It ended up being quite fine. 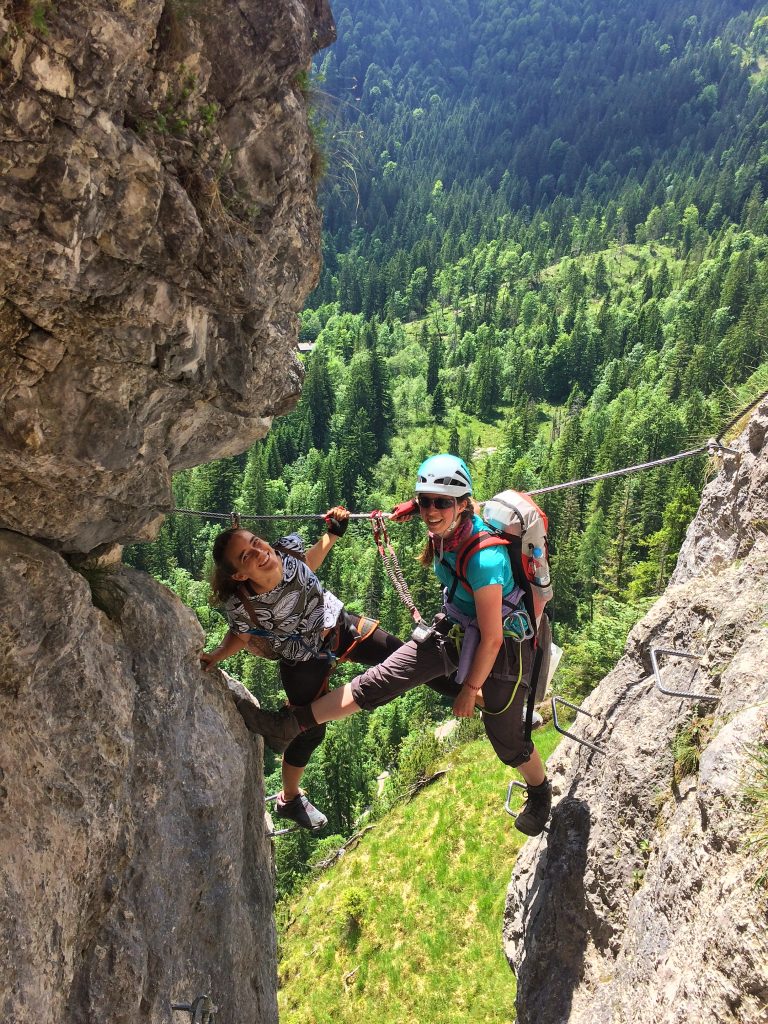 We spent three days in total, hiking the trails around the Watzmann, the main mountain in Berchtesgaden, and staying in huts. We had perfect weather on the first and last day. The last day was so sunny and warm that we needed to take a skinny dip in the Königssee to cool down and bathe before we joined the general public. Overall it was a good warm up for the bigger mission in the days ahead. 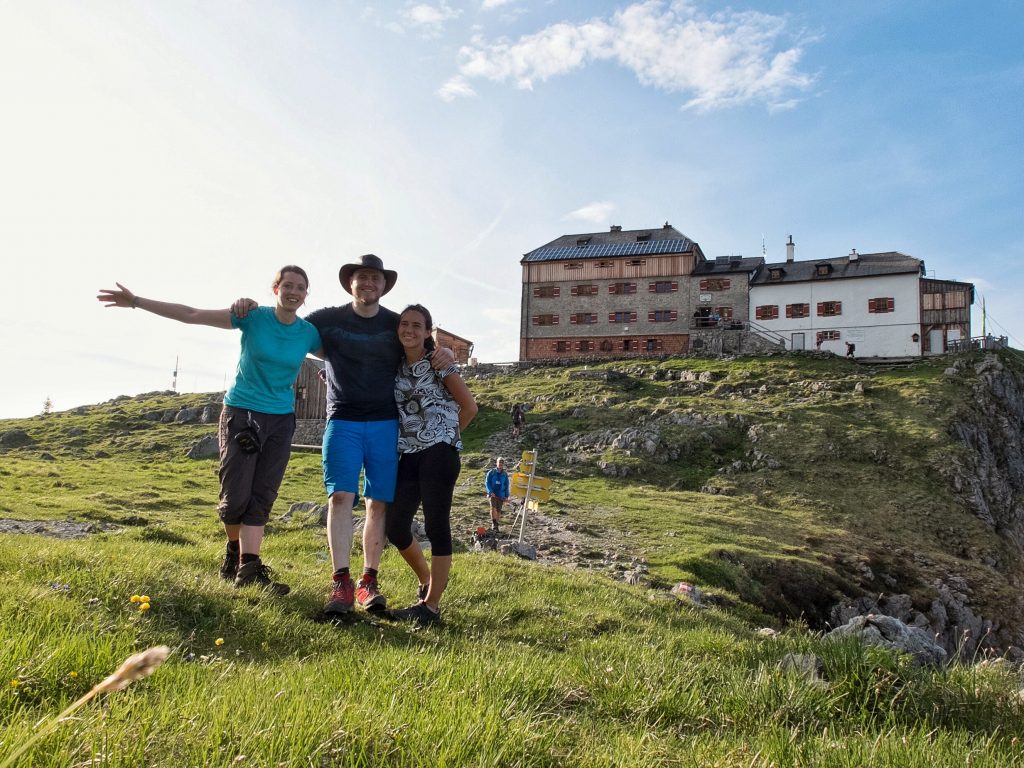 I packed most things in my backpack in the morning before running around downtown Munich to buy some food, an ice axe and some rope. I needed to catch the Flixbus at 13:50 to Garmisch-Partenkirchen (708m). It took only about an hour and then I am there, but unfortunately the bus and train connection to the starting point of the hike have already left. I would have had to wait more than an hour for the next one, so I decide to walk to the trailhead, it would also take an hour anyway.

The thing is it was starting to rain, so I put on my outer shell jacket. In the beginning it was just a little bit of rain, but when I reached the trailhead at Hammersbach it had started to pour. Now I didn’t let that stop me and continued onwards. The trail led me to the Höllentalklamm (gorge), which I paid 4 euros to access as it was a slight shortcut to the hut. It was so ridiculously wet in there. I might as well have stood under a waterfall and a waterproof shell wasn’t going to do anything to help. 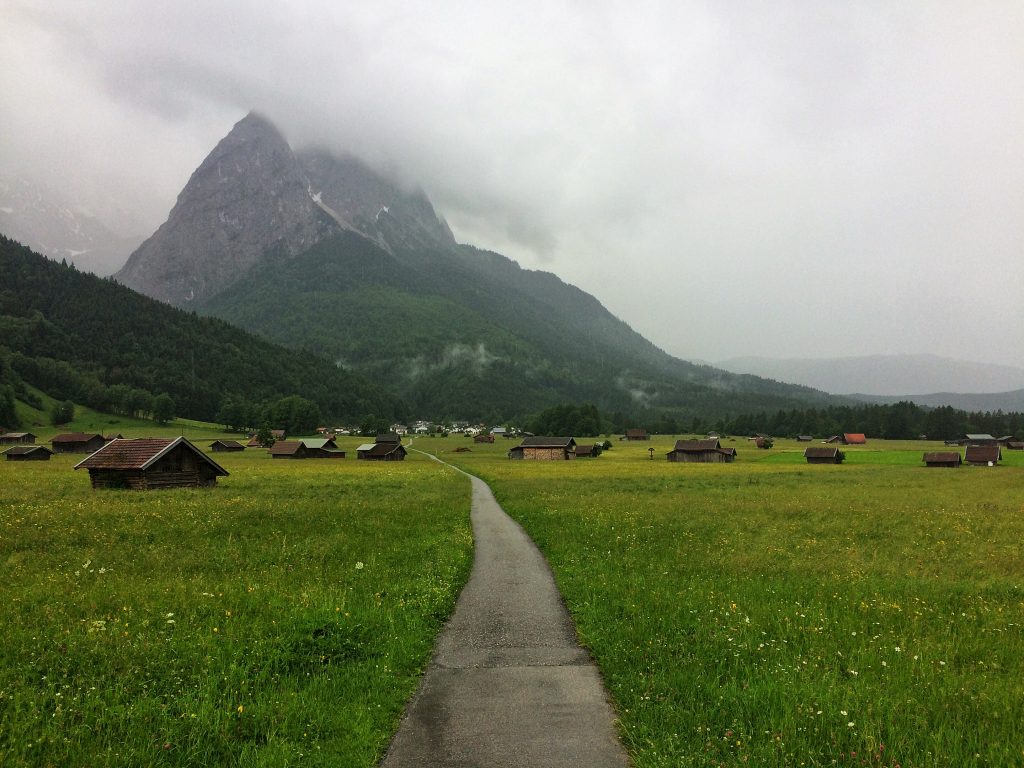 I almost ran through the gorge and the whole trail until I reached the Höllentalangerhütte (1381m). Normally should have taken some 2 ½ hours, but I was in such a hurry it took only 1 ½ hours in stead. Nothing was dry except the stuff in my backpack that was packed in a dry bag, thankfully including some extra underwear and clothes. I hung up the stuff to dry and checked in for the night. For dinner I had spinach Knödel and a couple Radlers.

When I told one of the caretakers of that hut that I was planning on climbing Zugspitze, he asked if I had any snow experience, which I said I did. He said this was not really the season to climb, should perhaps wait 2-3 weeks, but it might still be possible. A couple guys had come by a few days earlier and done it and he had not heard about any rescue, so they must have made it. He gave me schnapps free of charge on the condition that I would send him a short report of the route conditions when at the top. I promised I would do so and enjoyed this little nightcap before going to sleep.

I needed to get an early start, so it was up at 06:00 and out the door at 06:30. It was already bright outside and the sun managed to shine down the valley to warm things up around 07:00 when I had my breakfast. A raven landed nearby… “Bad omen” I thought? No, he was probably just looking for breakfast as well, so I gave him my apple core. 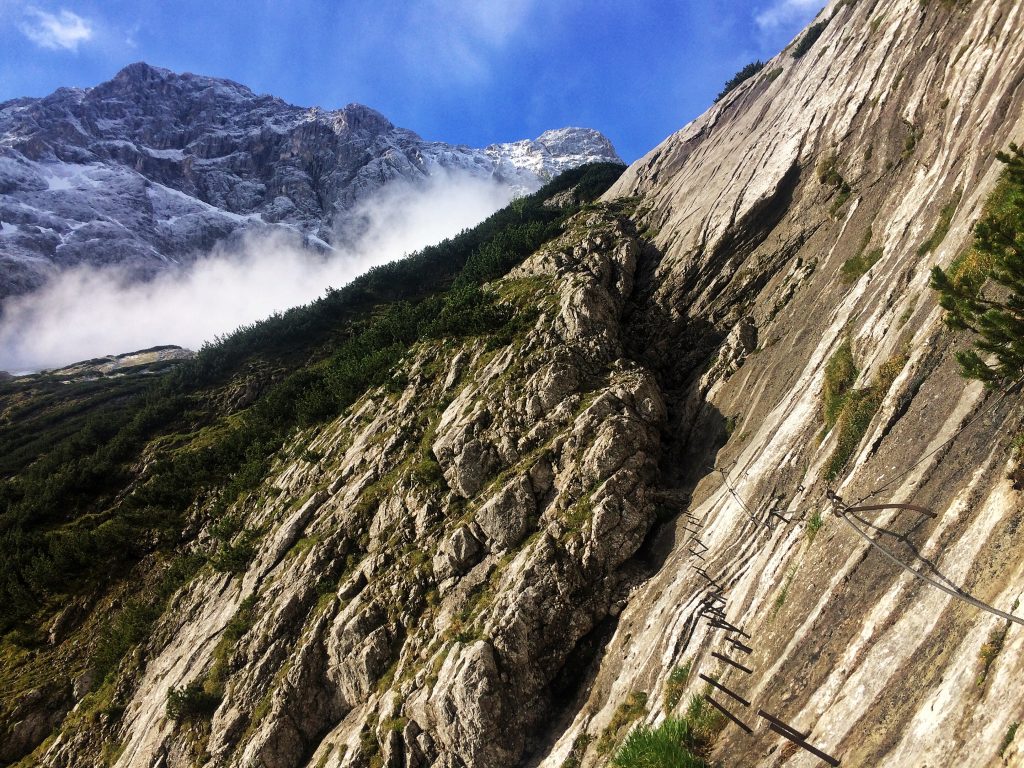 With long pants on I pushed upwards and as I get higher it starts to get cooler. The first section of the ferrata was not so hard, no snow and quite warm. It had a cool ladder section and a “bridge” of sorts made of irons sticking out of the mountain. When I was done with the first section, the trail continued through a glacier moraine and along the way I met a couple mountain goats. They didn’t seem bothered by me at all and I walked past fairly close. I guessed I was accepted as one of their own.

When I reached the glacier it was time to put on crampons and grab out the ice axe. I needed to traverse the Höllentalferner (glacier) in order to reach the second part of the ferrata. At this point the clouds started rolling in and it began to snow very lightly. Luckily I had 4G connection this high up at around 2500m and could check how the weather was. The report said it most likely wasn’t going to be getting any worse, light snow and frozen until 12:00, so I decided to push on into what looked like a cloudy void above. 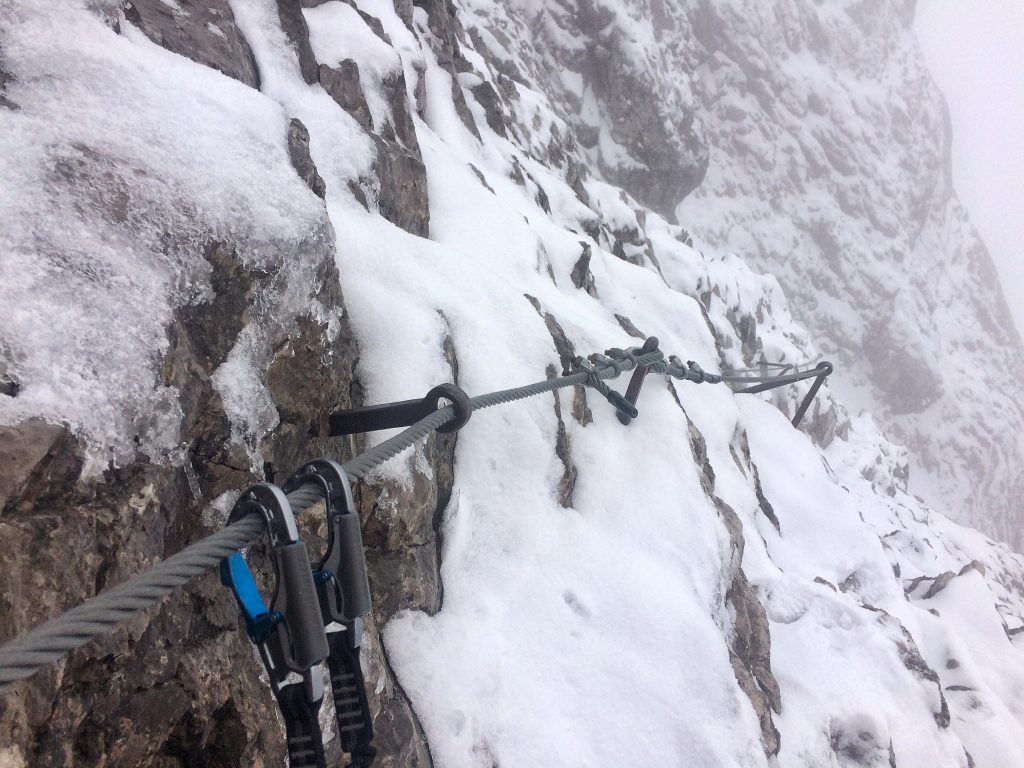 From this point I had roughly 2 ½ hours to do some 650m of elevation. I needed to traverse over crevasses and bergschrunds before finding the ferrata again. I moved carefully as I didn’t want to fall down into any of those, nobody would have heard from me again. I was glad when I reached the first ladder and continued upwards through a wet, icy and therefore slippery route. Those were the first 300m of elevation, the second 300m of elevation were quite snowy and the cable of the ferrata was often hidden deeply in the snow. This meant that I could not always clip in to be secured, so I had to carefully traverse these sections, one wrong step and I could have slipped down the mountain. The closer I got to the top the more I needed to use crampons and an ice axe to safely continue.

I reached the summit at 12:00! ! Just in the right time! I was a bit overwhelmed by how hard, crazy and yet amazing this climb was, so it was nice to be able to share the summit experience over video chat. There were people already there near the top that cheered and watched as I spent some time at the summit cross. They had taken the cable car up to a viewing platform, the easy way. The view wasn’t anything to brag about, as it was still somewhat cloudy. 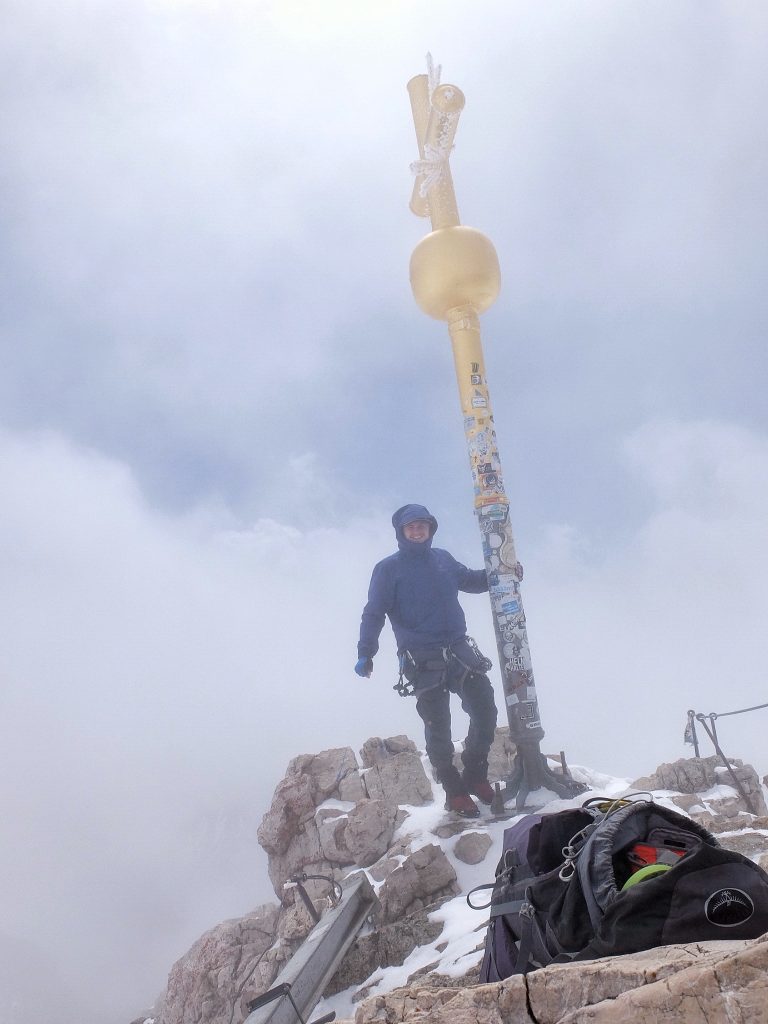 At the top there is a hut called Münchner Haus (2959m), where I could grab a Radler and a sausage with a pretzel as lunch and a reward. I sent a quick email about the conditions as promised to Höllentalangerhütte and then continued on my way down the mountain towards Austria in the South. I needed to reach Knorrhütte (2052m) before it got dark and I needed to go down 900m elevation through a similar snowed in route. I met some people along the way trying to go up the route, but they turned down once I told them how it was, they didn’t look like they were very equipped or experienced for such conditions. Some of the way I managed to slide down on my butt in the snow, it was quite fun and much quicker and easier than walking. 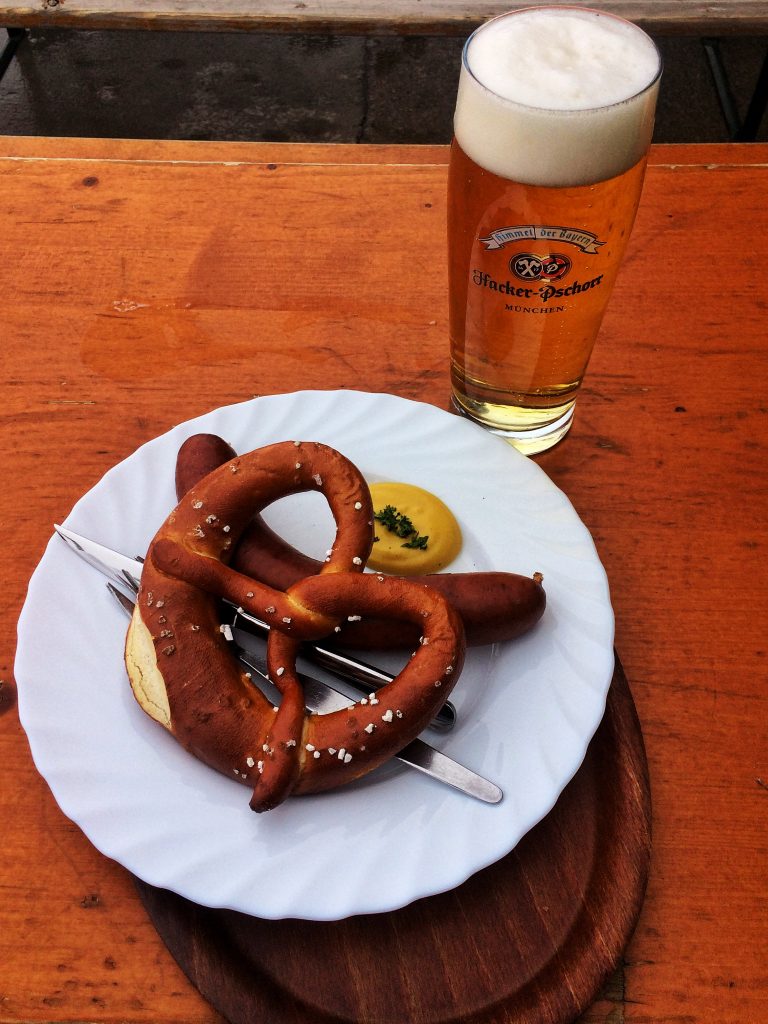 The rest of the walk was easy and I reached the hut with daylight to spare. I checked in, took a cold shower, hung out and had some food. I met some guys from Israel and a German and we chatted over a couple beers. A nice finish to an amazing day!

This morning I was not in a hurry, so I stood up at around 07:00, had some breakfast and left the hut at 07:30 heading towards Austria. The sun was shining and barely a cloud in the sky, quite the contrast from the previous days. My next goal was Coburger Hütte (1917m), an idyllic hut located in the Mieminger mountain chain just on the other side of the border.

I had to descend to 1500m and then head up again to the hut. With the heavy backpack my feet were not too happy, especially as I had to walk on normal roads. Upon reaching the hut around mid-day I was quite glad I could throw off the pack and have some lunch, a Kaspressknödel soup, yummm. It was so warm and perfect weather that I could not imagine just hanging out there for the afternoon. There were lots of mountains around and the guidebook I had mentioned Vorderer Tajakopf (2450m) as a worthy via ferrata goal, 650m elevation gain. 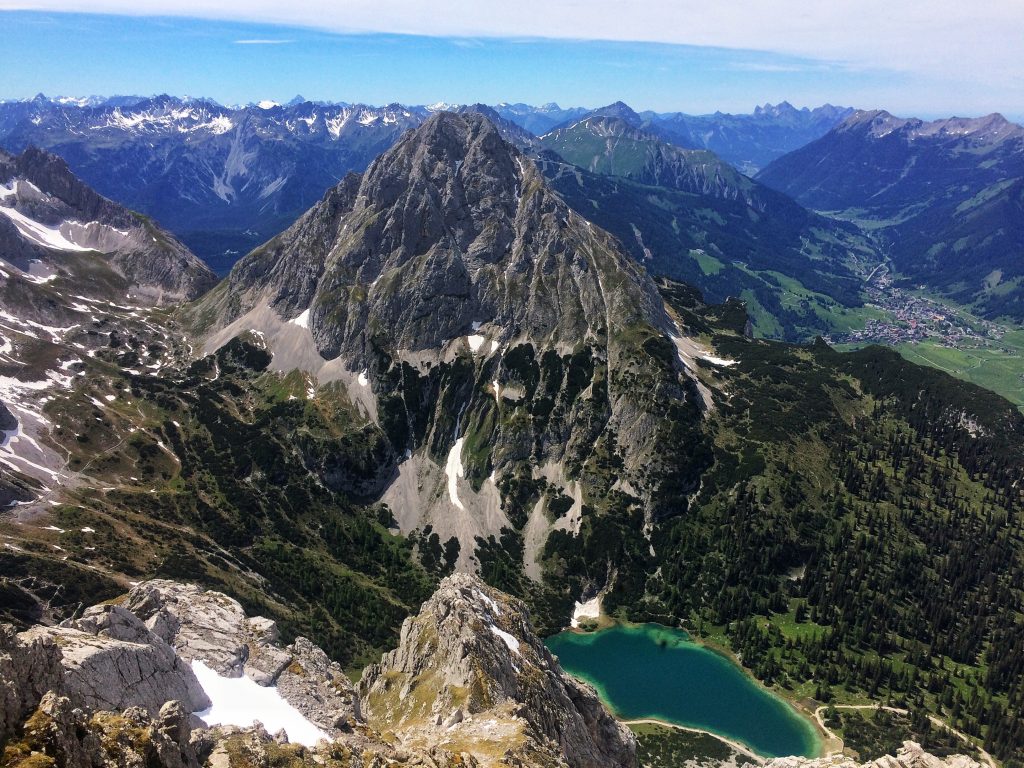 With minimal equipment, some water and couple of Clif bars I set out to climb Vorderer Tajakopf. There were already some people on the route, taking their time. I had plugged in my music, gotten in the groove and took this as a fitness challenge, so I ended up somewhat speed climbing the route, passing everyone along the way. Once at the top I saw that I managed to do the route in half the estimated time, so I still had loads of time and daylight left. I decided to also climb Hinterer Tajakopf (2408m), which was closely linked and also had a short section of via ferrata.

When I got back down to the hut in the late afternoon I was sweating so bad that I definitely needed a shower. However the hut is located right next to a glacier lake, clear and beautiful, so I decided to skinny-dip in there instead. That was probably the coldest dip I have ever taken! My body felt like it was burning! The temperature of the lake must have been just a couple degrees and I was almost afraid I would get a heart attack from the shock. Needles to say I did not spend a lot of time in there. 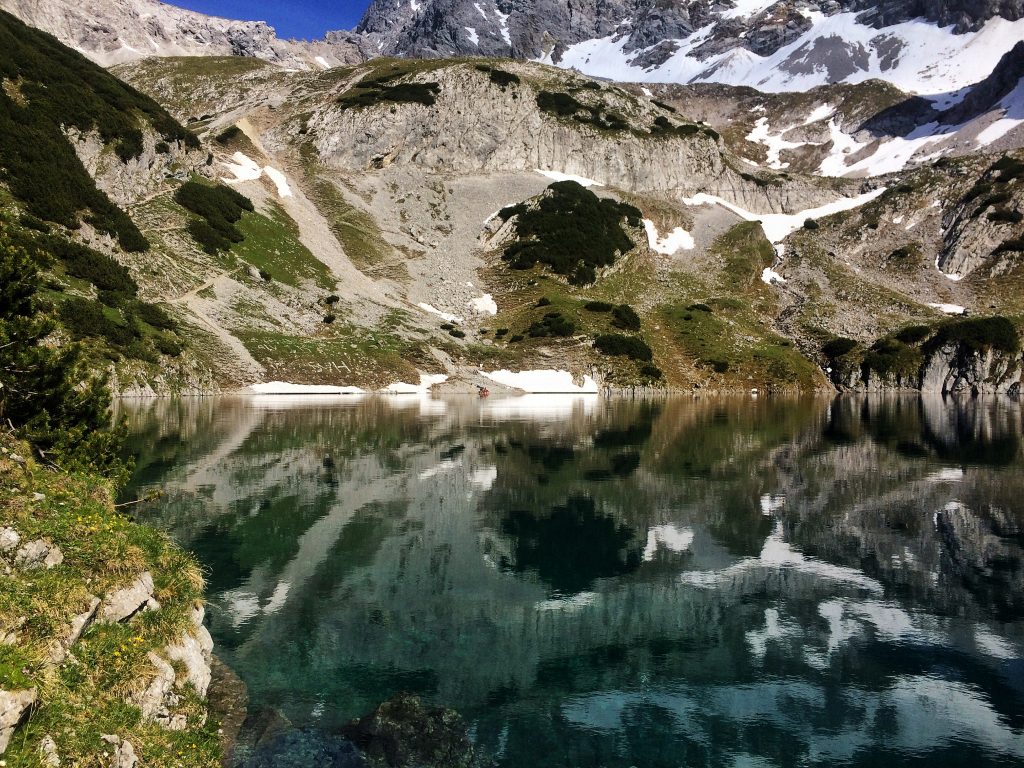 The route I had done should have taken some 8 hours, but instead I did it in 4, so there was still time to relax and drink some well-earned Radlers. When dinnertime came around I ordered Kaiserschmarn, an authentic Austrian treat that can be eaten as a dessert or a main meal. They are a kind of chopped up pancakes, eaten with sugar and applesauce. Very much recommended! After dinner there was not much to do but crash in bed, my body totally beat from the days and previous days efforts. 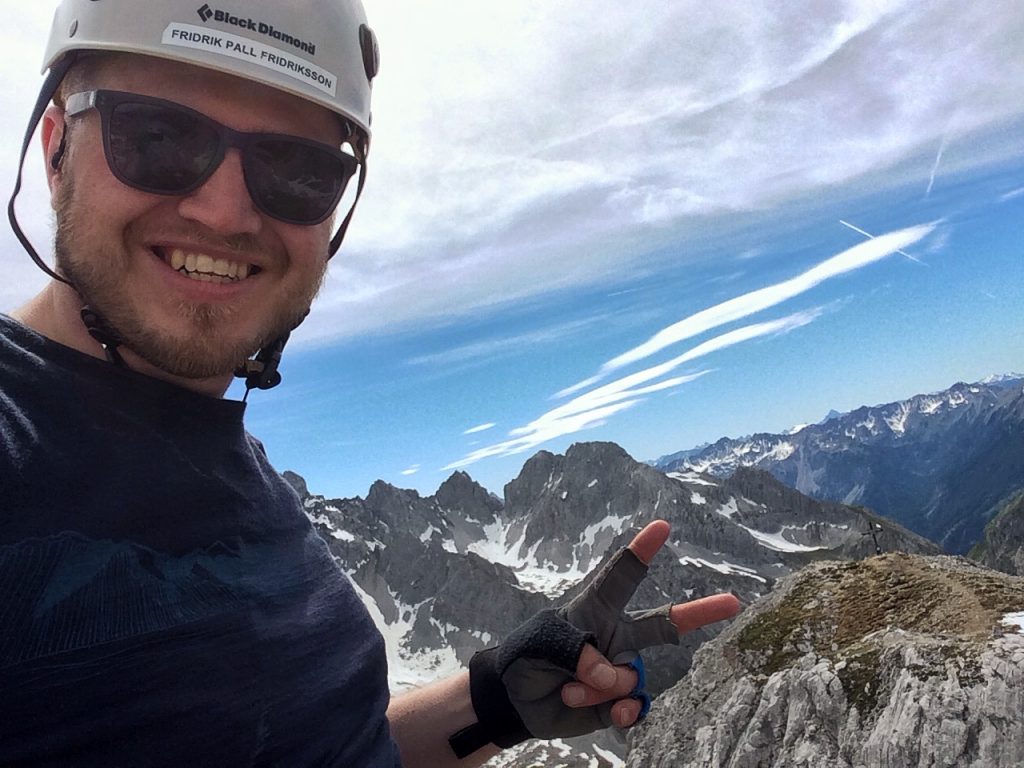 Not really wanting to leave the comfort of the hut I still got up in the morning, packed my stuff and started walking East towards Innsbruck. The idea was that I would walk the long Gaistal valley, some 10km to a small town called Leutasch, where I figured I could grab a bus. It was pretty straight forward, walking on the roads. It was a very warm day and thankfully there were Alms with water springs along the way. Now my feet were even less happy than the previous day and definitely made their opinion known. The combined strain of a heavy backpack and perhaps not ideal shoes for this sort of a trek took their toll. 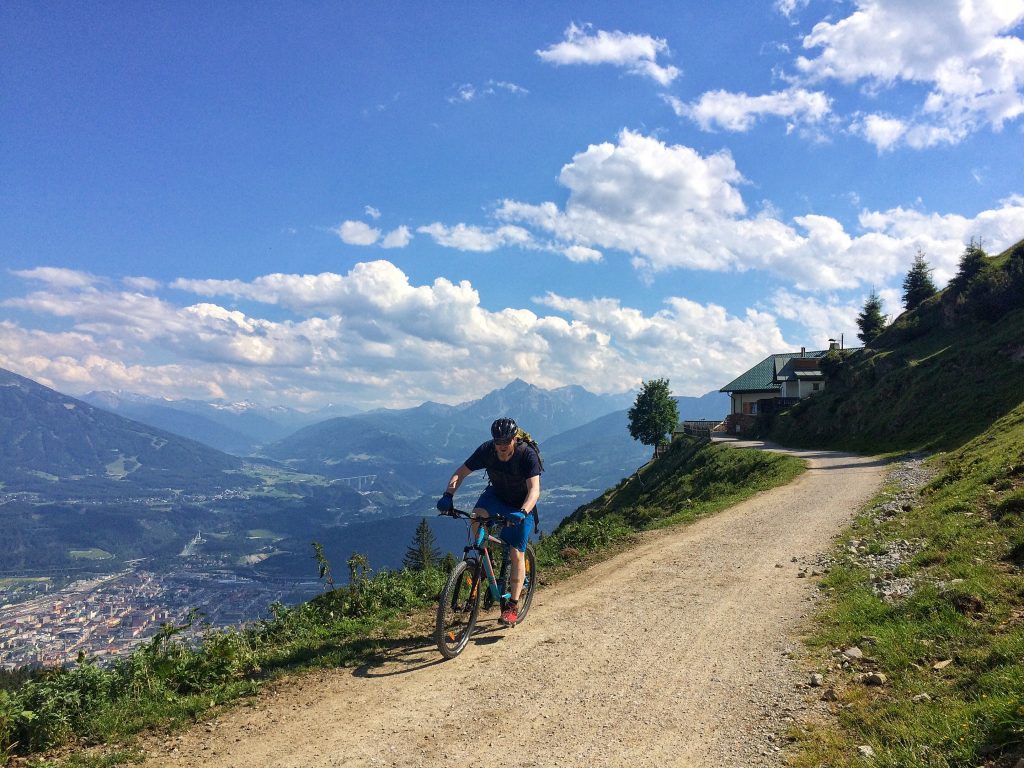 I reached the end of the valley around noon and was extremely happy to jump on the closest bus stop I could find. The bus took me to Seefeld, where I took the train onward to Innsbruck. Luckily I had a friend in Innsbruck, Clemens, which had invited me to stay for a couple days. Unfortunately my feet needed to spend some time in recovery and I could not climb any more mountains. Thankfully we managed to drink some beers, go out mountain biking and sneak camp in the forest with some other friends. A good bow tie ending to an ambitious mission! 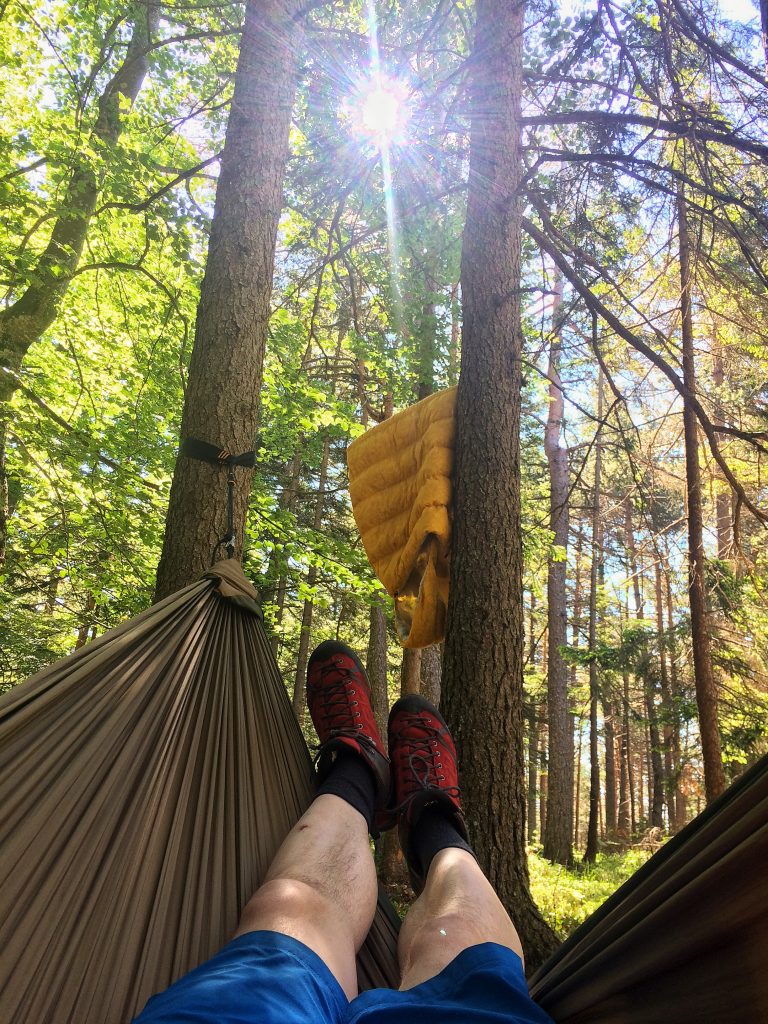