I am a mountain person. Climbing mountains is how I feel alive and happy. There is a goal and in order to reach that goal I must fight through obstacles, both physical and mental ones. So when I saw that there was a slight two-day weather window after a period of bad weather I decided to grab it and head to South Tyrol, Italy to climb a random high peak I found. It just so happens that it is the highest in the Zillertal Alps and the 18th highest in Austria as it is on the border between the two countries. It would also become the highest mountain I had ever climbed, beating Mulachén (3478m) in the Spanish Sierra Nevada’s by a few meters.

I catch the train at 09:49 from Innsbruck heading to Italy. First a quick stop in Brenner at the border switching trains and head to the South Tyrol town of Sterzing or Vipiteno as it is known in Italian. There I wait for the bus taking me to Wipptal, where deep in the valley, at the very end, my trailhead awaits. I talk with the bus driver, which drops me off at the last stop and gives me a tip of what road to walk. I am the only one getting out at the stop and definitely the only one heading up into the mountains. 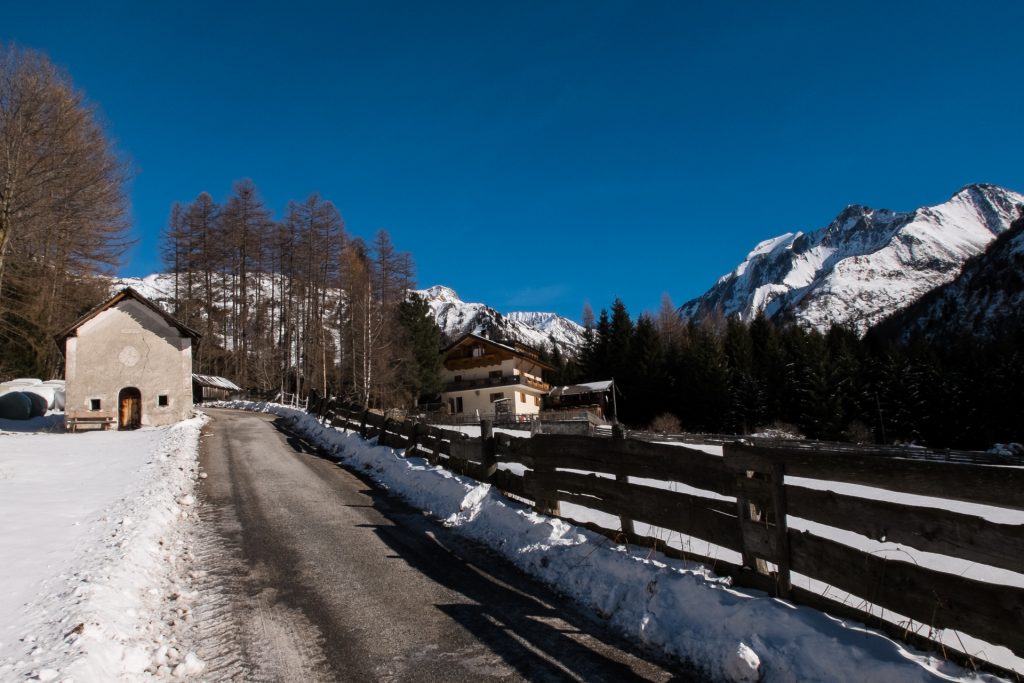 I start walking at 12:00 from Anger (1460m) and the signs say it should take me roughly 5 hours to get to the Hochfeilerhütte (2710m). That fits just right with the amount of daylight. I pass through the last little farms and begin walking up a road. At first there is now snow, but soon I am walking in snow and no other tracks ahead. I try the snowshoes that I rented from the alpine club and they work well on the road, but as soon as I get on the trail heading up steep they don’t work as well. 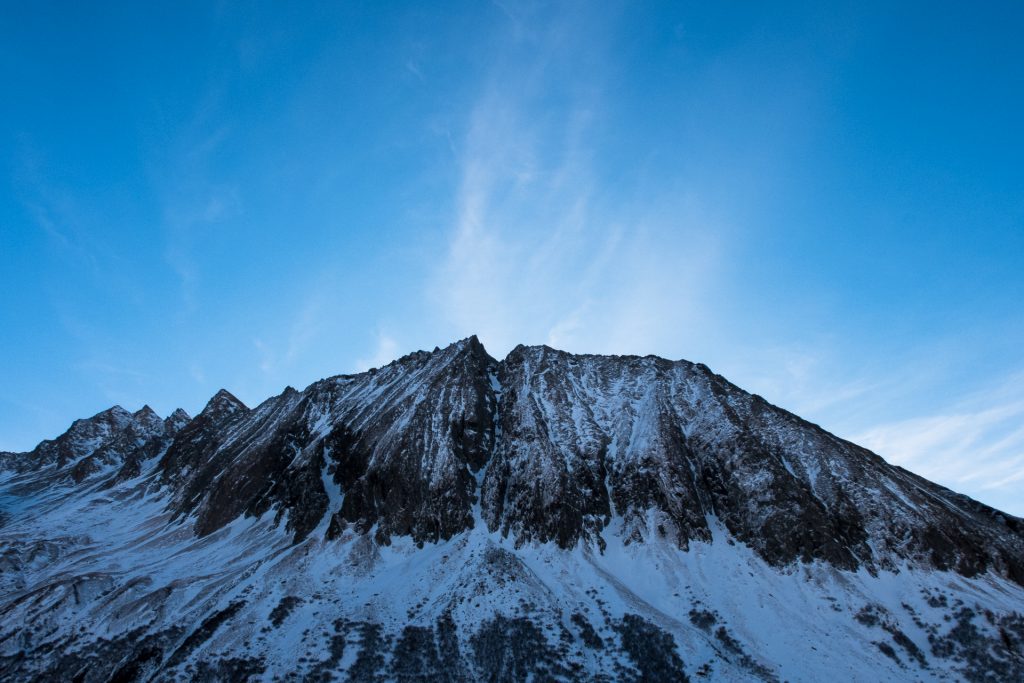 I manage to follow the trail for a bit, but once I pass the last sign it gets impossible to follow because of the forest and deep snow. Apparently in South Tyrol they don’t want to mark the trees, either because of environmental concerns or they just want to save paint. Thankfully I had prepared beforehand and downloaded the GPS track in addition to a map and compass, so I could make my own way through a less snowed in slopes and get back on the track later on when it would level out a bit more. It is tough going until I reach above the tree line, then I can put the snowshoes on again and stop sinking waist deep. It seems like the trail is more of a trench as the snowdrift has filled it up a meter deep. 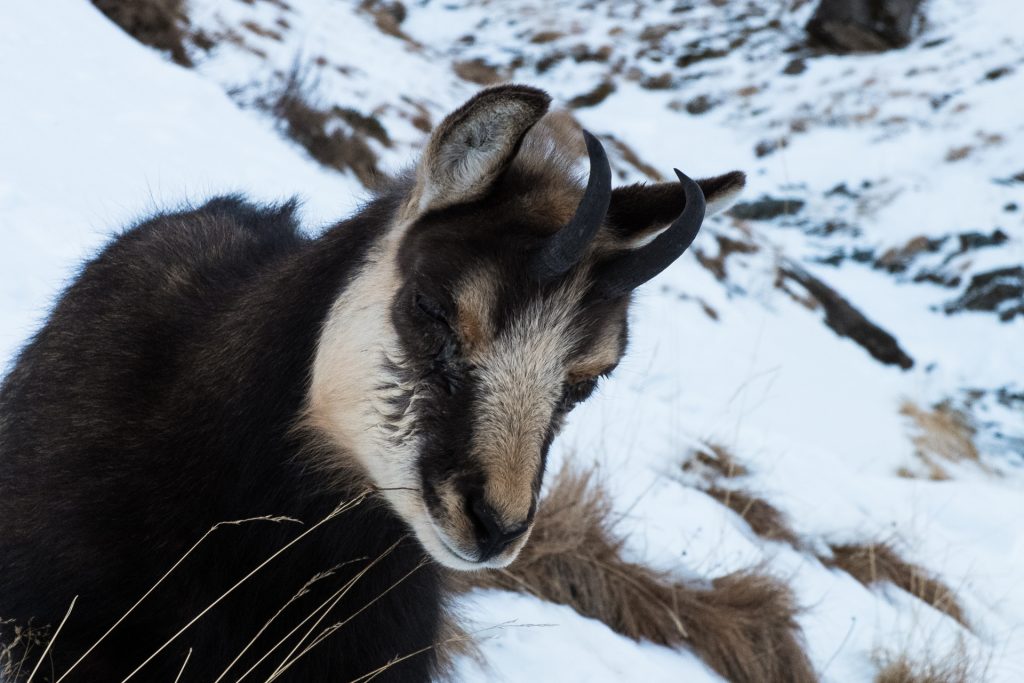 All of a sudden I stumble upon a Gämse (chamois), it is standing next to the trail eating. It does not seem to hear my steps or see me. I stop about 5 meters away to take some pictures and it slowly approaches me, coming so close as just a half a meter. My guess is that it can’t see or hear very well as most other ones would have ran away already. Still quite and amazing experience seeing one this close. I keep walking and stumble upon another group of mountain dwellers, the Steinbock (Alpine ibex), majestic creatures with great big horns. They are not as friendly and I decide to stay away, they also “whistle” at me, which I take as a sign that they don’t care for me very much.

The trail starts to get steeper and smaller as it traverses the mountainside heading deeper into the side valley. The hard pack snow and a 45° angle slope is a challenging obstacle and I need tread carefully. I however start to see my goal, Hochfeiler (3510m) and the Hochfeilerhütte. The sun is getting lower and I am still hopeful that I will reach it before nightfall.

I pass over a bridge and hear some water flowing und the snow and ice. That is a lucky break, being quite high up roughly 2500m, so that means there is less snow for me to melt later on. Soon I pass by a sign that says it is 30 minutes to the hut. The sun has now set, it is pitch black and no moon out so I put on my powerful headlamp to light my way. I realize that I won’t make in the time that the sign said it would take. The snow is changing between being hard packed, so that I need to chop steps with my ice axe and soft, plunging me waist deep. 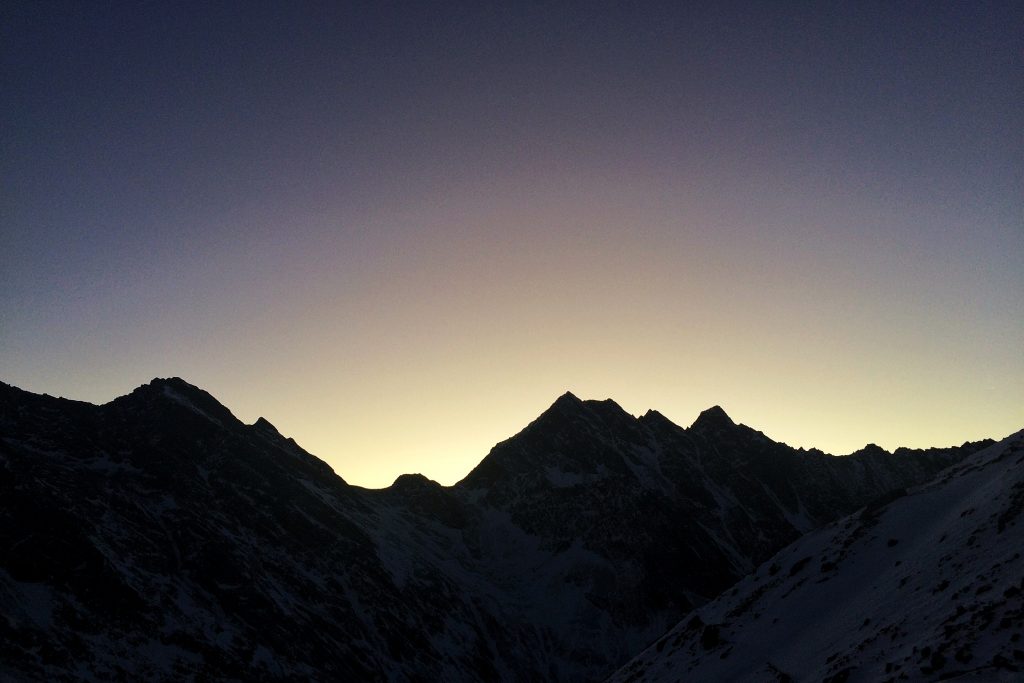 When my headlamp finally shines on the side of the hut I am very relieved, it has taken me almost 1,5 hours to reach it. I arrive at the hut just before 19:00. I locate the winter room and squeeze inside. My toes are quite frozen and the first thing I do is heat a liter of water to fill my Nalgene bottle. It is the best trick I know to get the toes warm. I throw it in the bottom of my sleeping bag to heat them up as I get on with cooking dinner.

The room is small and cozy with a table, a bench and what seems like pretty decent bunk beds with a thick mattress and plenty of blankets. Before jumping into bed I go outside to collect some snow. I am greeted with an incredible starry sky and the Milky Way clearly visible. I get the snow and quickly melt it down and boil it so that it will hopefully stay liquid until the morning.

Reflecting upon the day I am quite glad that I am doing this alone, as this was quite the challenging task trudging through the snow and eventually making my way to the hut in the dark. A type 2 kind of fun, if that. Though now I just want to snuggle in my sleeping bag under a big pile of blankets.

My alarm is set at 05:30, though I don’t get out of bed right away. It is still dark outside. The sunrise is not happening until roughly 7:15 and I don’t want to go out running in the dark. I do eventually get out to cook breakfast and make some tea. As always it is oatmeal, with my newly discovered pureed fruit additive. Delicious and filling.

I pack up, put on my frozen pants and boots, thankfully with fresh dry socks. It is starting to get lighter outside as I leave the room at 06:45. I decide to take the steeper, rockier route up the mountain, as it is more likely to be ice-free. It is fresh outside, but not too cold. The horizon starts to glow a faint orange and then the tips of the mountains far away start to light up and it travels further and further down the mountainsides. It is an incredible sight so I have to stop for pictures. 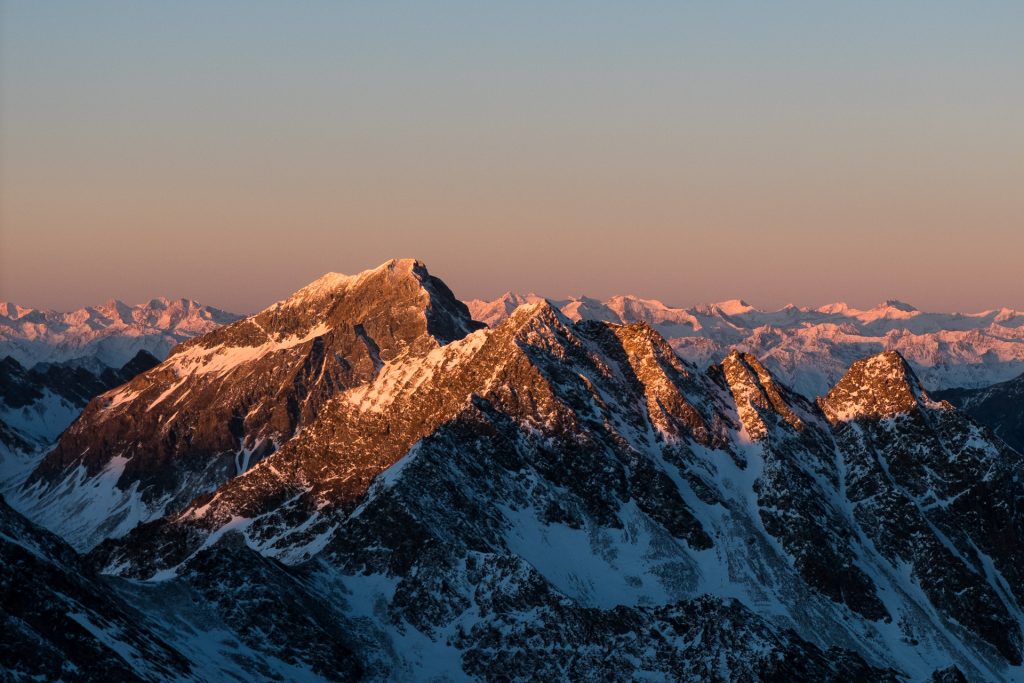 The conditions are quite good above 2700m, with the rockier section I don’t need to worry about snow, avalanches or any such things as everything is quite wind blown. I make good pace, stripping a layer when the sun hits and soon reach a cairn at 3193m. I make a small depot of things I don’t need to take with me further e.g. snowshoes, sleeping bag and cooking things. With the pack being even lighter I can go faster and use less energy. 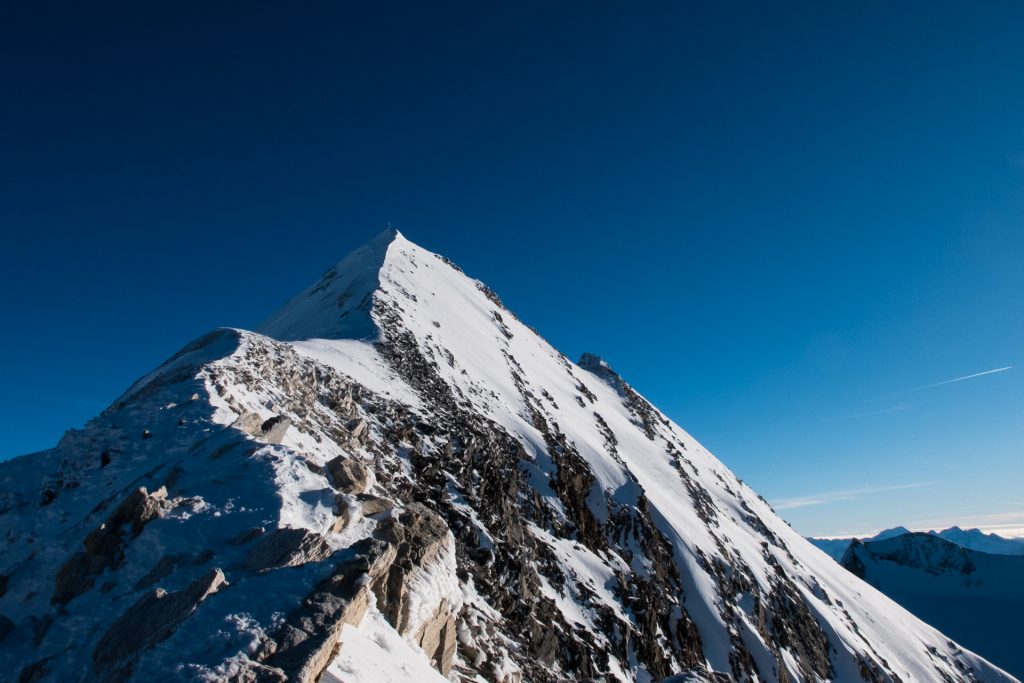 Step by step and I finally reach the summit at 09:15! Hochfeiler! It is the highest mountain in the neighborhood and the 3000m peaks in the surrounding area look short in comparison. Quite amazing to look over the various mountain ranges in every direction! It is a clear day, no wind, sun beating down on me, best summit conditions one can imagine. I take some pictures and sign the book. I am apparently the only one to summit in the last couple weeks. 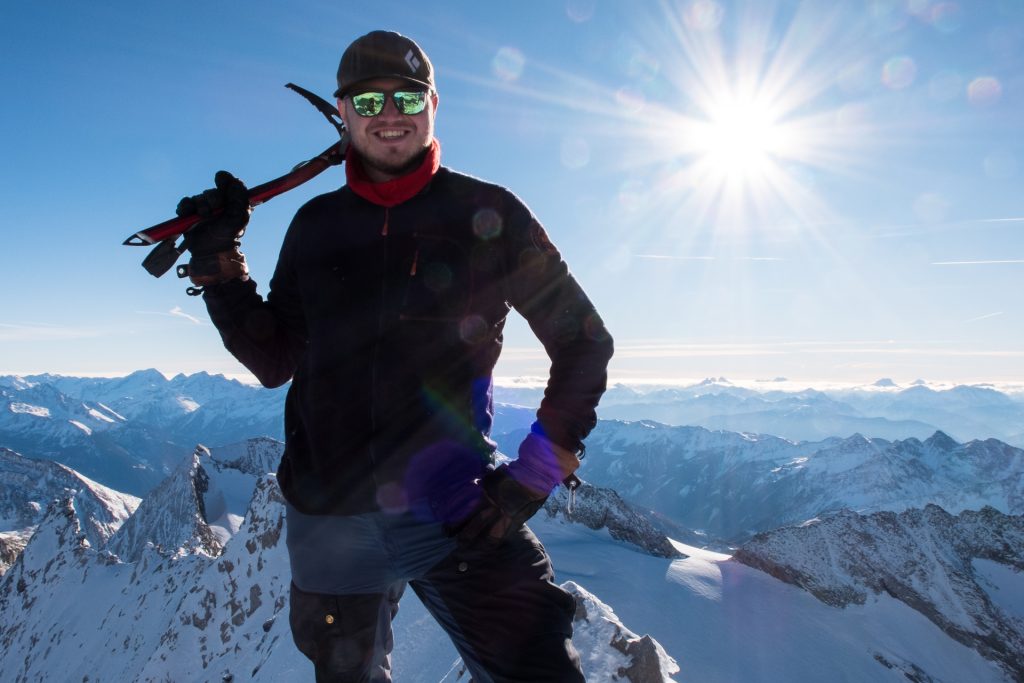 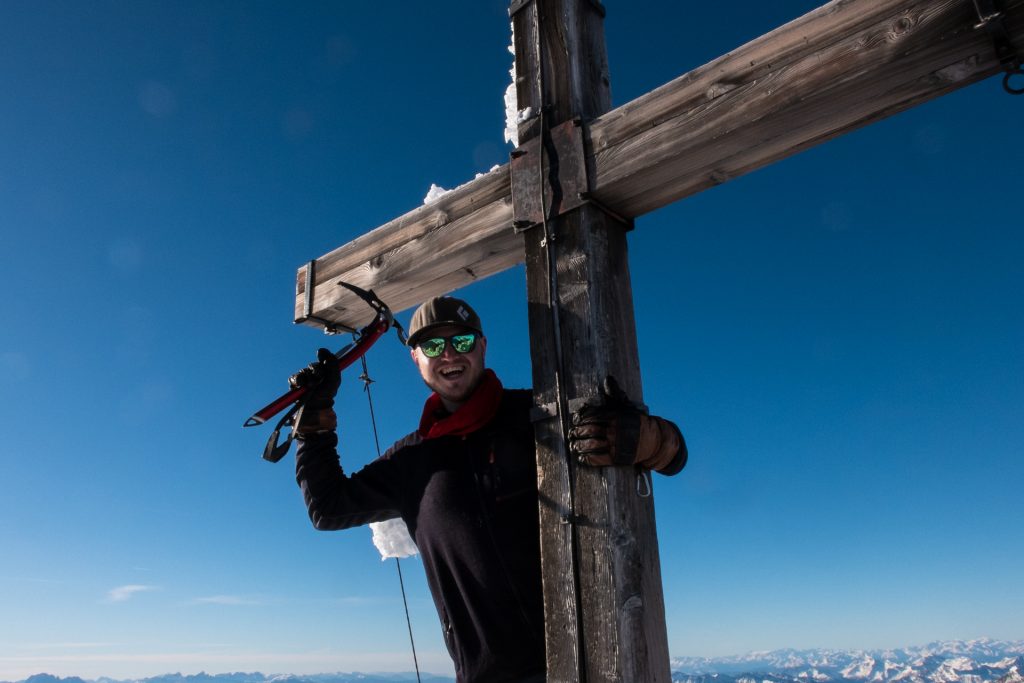 After just 15 minutes of standing on top I feel it is time to head down. My toes are cold and need movement. It is fast going with the pre cut steps. I decide to keep the crampons on and just head down the snowy patches, which I had avoided on the way up. It is much faster hiking on the snow/hard pack as I don’t have to worry about sliding on rocks. 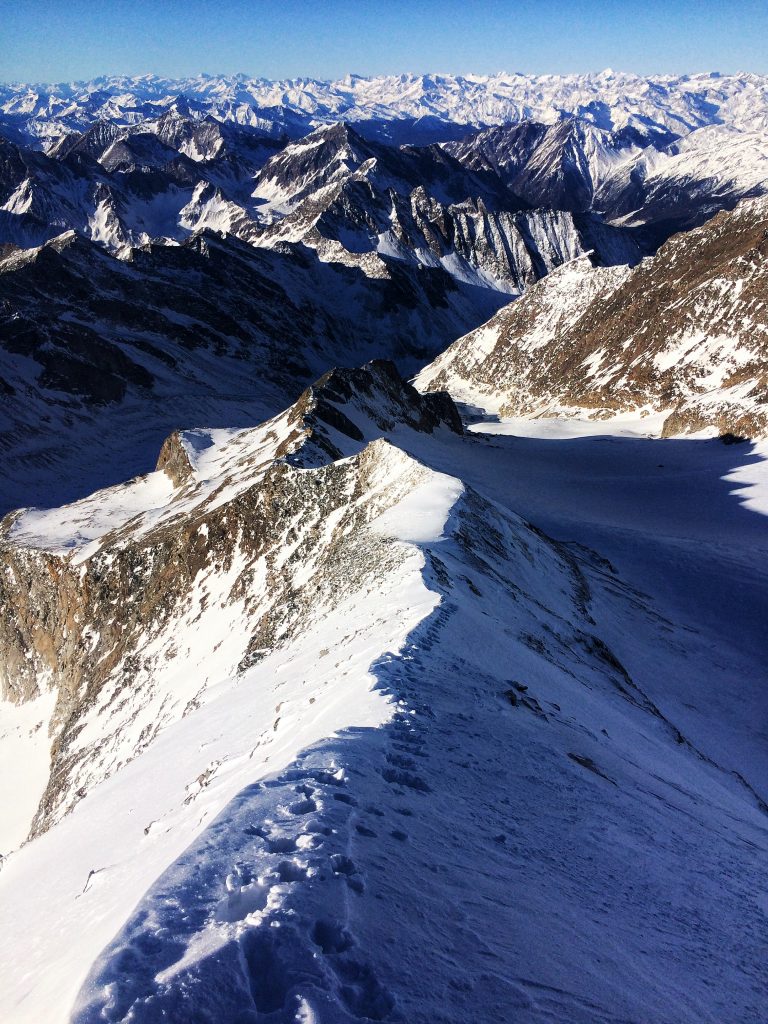 I quickly reach my depot and pick up the things. Then continue down, kind of making my own way, not bothered about the actual trail. The sun is becoming brutal; with the temperatures rising I strip down to just my base layer. Upon reaching the sign that told me it was 30 minutes to the hut I shift from crampons to snowshoes because the snow is getting softer and deeper. 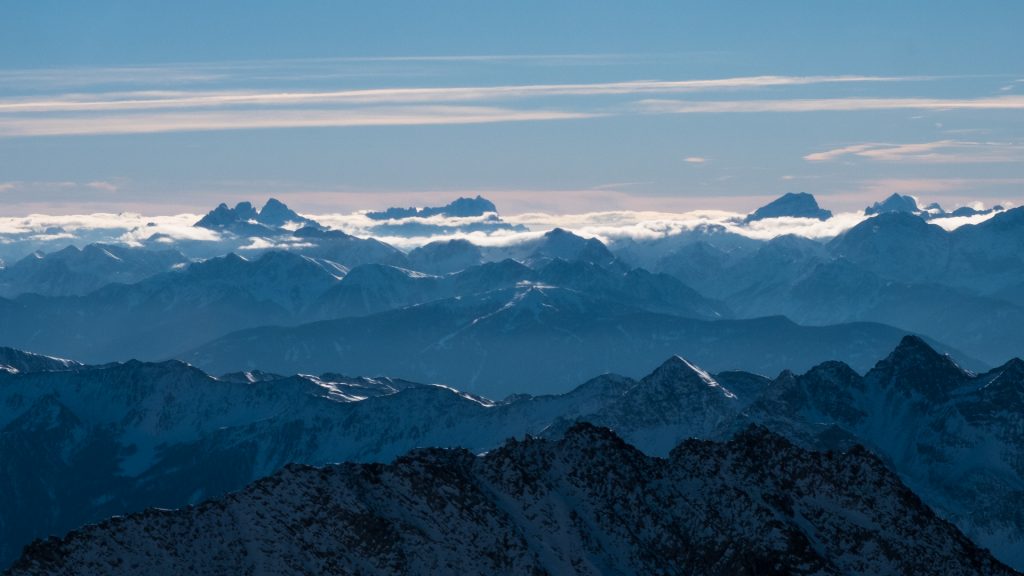 Putting on the snowshoes is like giving my feet 4WD! The conditions have changed quite significantly from the previous day and I eat up the trail, making one step where the day before I made two. What a difference the sun and temperatures have made.

I don’t really bother stopping for much, just enjoy the fast paced travel and see myself getting to the bus stop way ahead of schedule. At 12:30 I check the bus timetable and see that I can grab the next bus at 14:10. I decide I am going to make it and put things into high gear. It is therapy to travel at my own pace with a set goal in mind. 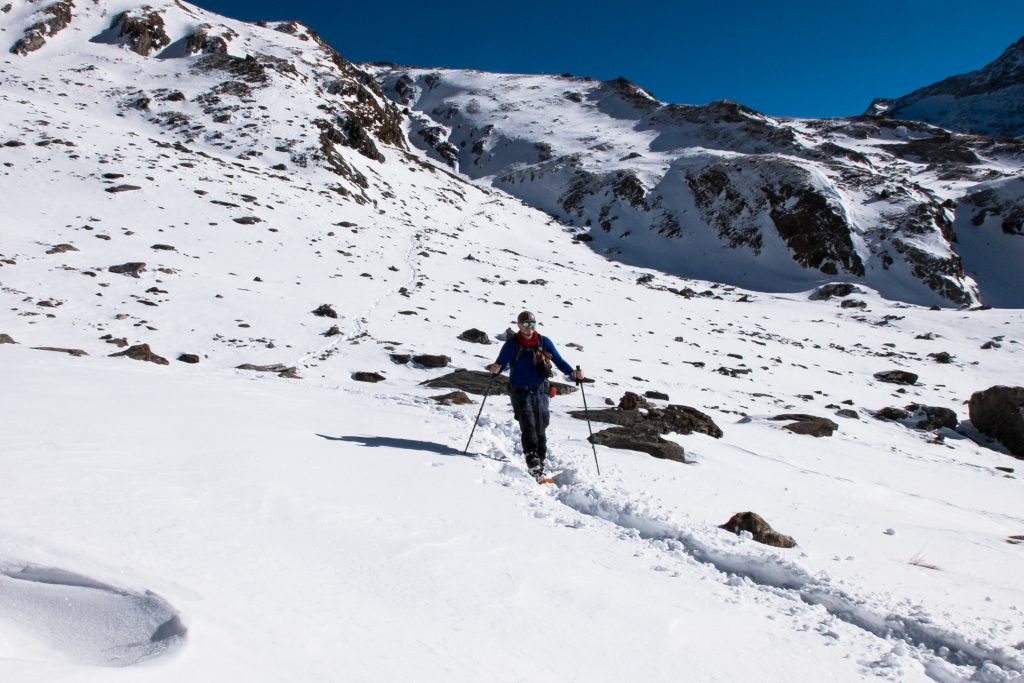 I get to the bus stop with 15 minutes to spare. It is the same bus driver and he is slightly surprised to see me and hear that I actually made it. At Sterzing train station it is an easy thing to jump on the train and get back to Innsbruck.

At home my housemates also just got back from skiing. I suggest we make traditional Austrian power food, Käsespätzle. Nothing better than ending a crazy day out with a Radler and some delicious food, all well earned!